Houston Dynamo and Dash have announced a new sponsorship deal with BHP.

It was announced Tuesday that BHP Biliton will be sponsoring both the Houston Dash and the Houston Dynamo jerseys. A deal has been reached between the teams and BHP that will last until 2017 with a two-year option. 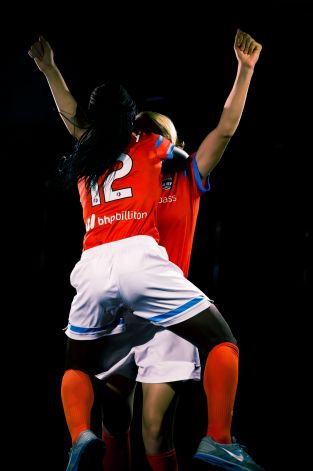 In 2007 the Dynamo formed a partnership with Amigo Energy for a four-year sponsorship deal. At the end of 2010 it was announced that Greenstar Recycling would be the new jersey sponsor in a deal that would last for three years with a two-year option. However, the deal ended after just two years when the company was bought out by Waste Management and the two sides agreed to end the deal. Since that time, now a year and a half later, the Dynamo jerseys have remained blank on the front.

From the outset the Houston front office said that they would be looking to get a local sponsor. They seems to have found that in the global company with local ties. BHP Biliton is a mining and petroleum company headquartered in Australia and England. The company's petroleum unit is based in Houston and has almost 2,000 employees. The vast majority of their mining operations take place in Austalia, but they do mine in Permian Shale and Eagle Ford Shale in Texas.

If you have already bought a jersey and are worried about it not fitting in anymore not to worry. You can take it to the team's store at BBVA Compass Stadium and get the logo put on for free. New jerseys with the logo already on them are also available at the team stores.