Fantasy MLS: In-Form Players For Round 20

Fantasy MLS round 20 starts on Wednesday. Are you ready?

Share All sharing options for: Fantasy MLS: In-Form Players For Round 20

Between the cards and injuries during Round 19 and the New York Red Bulls having a bye this week, Fantasy MLS owners are going to be looking to apply some triage to battered and bruised rosters. Thierry Henry, Bradley Wright-Phillips, Jermain Defoe, and Cristian Maidana are all out this week. Here are a few go-to options (via Fantasy.MLSSoccer.com) to help stop the bleeding in Round 20: 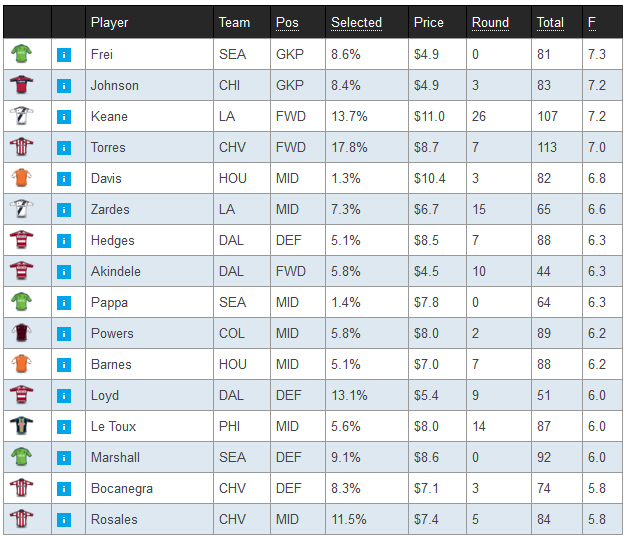 Stefan Frei and Sean Johnson both look like good goalkeeping candidates for the upcoming weeks. Both have decent fixtures and a double game week in the near future. Seattle Sounders have kept three clean sheets in their last five matches, and Johnson came up with a clean sheet and a penalty save for a whopping 16 points in round 18.

In defense, Matt Hedges is the safer, more expensive pick for a Dallas team that's conceded one goal in its last three matches. Chad Marshall is also a good play with his high CBI production, but good defenders come with a hefty price tag.

Houston Dynamo supporters know that Brad Davis has been on fire for the last few weeks and the Fantasy numbers prove it, even though Houston has not been getting results. Gyasi Zardes has also been putting up big numbers in the midfield and Dillon Powers has a double-game week coming up in Round 21.

Robbie Keane decided to show up and play last week, and his 26-point performance put him on the top of the "no-Red Bulls-included" form listings for forwards. Erick Torres has a six game goal streak going... it's almost like he's a goal-scoring robot. Tesho Akindele has provided nearly the same scoring output, but for $6.5 million less fantasy dollars than Keane. He may be my new #4 forward after Harrison Shipp's double-game week in Round 21.

Who are you bringing in for damage control? Don't forget that the rosters lock today at 9:30PM Central... and remember, don't forget to choose a different captain than me!