No rest for the weary Fantasy MLS manager in THIS league -- Round 20 ended on Monday, and Round 21 kicks off this evening at 6PM Central! Are you ready?

Round 21 boasts a whopping seven double-game teams, and there are plenty of in-form players to pick from that have the potential to bag double-digit scores. Below are the latest form stats from MLSSoccer.com for the players (as of  the end of Sunday night's matches). The top group are all players with two games this week. The seven at the bottom are the non-DGW players with the best form coming into this week's matches: 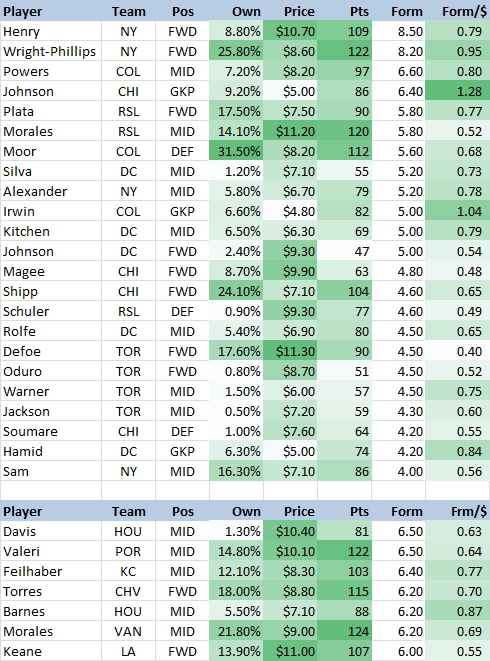 Thierry Henry and Bradley Wright-Phillips lead the pack as the only two players with a form higher than seven points per game. Henry has notched four assists in his last four matches, and BWP is on a five-game scoring streak. The best value for the fantasy dollar comes from the DGW goalkeepers; Sean Johnson and Clint Irwin are both clocking in at over one point per million fantasy dollars spent, and that's not even taking into account that both are likely to see 180 minutes this week. On the attacking side of the field, Perry Kitchen, Eric Alexander, and Joao Plata are all value bets for this week. Just remember that you will need reinforcements for any New England Revolution and New York Red Bulls players in Round 23; both teams are on a bye in the upcoming weeks: 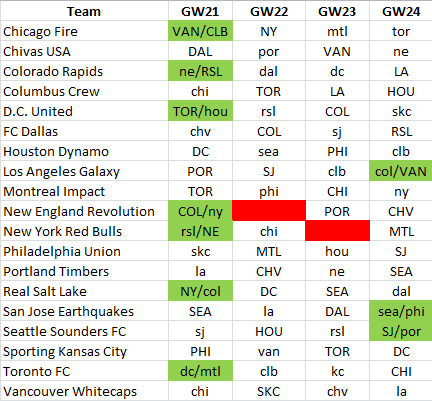 Who's your differential this week? Who are you thinking about giving the armband? Let me know, and as always, be sure to pick a different captain than me!