Fantasy MLS - Back from Brazil, Staying Ahead of the Curve

Several key players from the 2014 World Cup have returned to MLS and double-game weeks abound -- do you know who you want to transfer in over the next few rounds??

Share All sharing options for: Fantasy MLS - Back from Brazil, Staying Ahead of the Curve

A majority of the MLS-based 2014 World Cup players have returned home, and some are already having an impact on league play. Brad Davis and Boniek Garcia helped salvage a much-needed point against Tim Cahill and the New York Red Bulls last weekend. Other US National Team players like Clint Dempsey, Graham Zusi, and Michael Bradley will be eager to provide a similar boost to their respective MLS clubs.

With that in mind and seeing as how we're nearly halfway through the season, it's not a bad idea to assess the MLS players' statistics to date. Chivas' six player showing in the Round 17 Dream Team should be enough to make us all realize that the double-game weeks are nothing to kid around with. Here's a look at the upcoming few weeks: 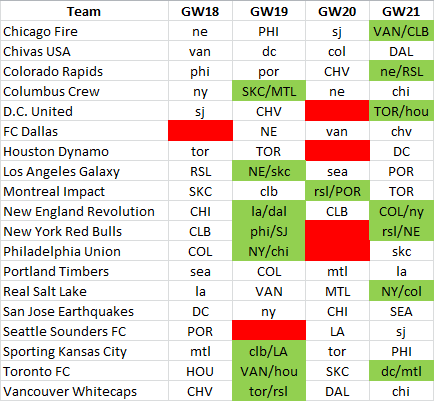 As you can see, there are double-game weeks aplenty over the next few weeks. Below are some options for each position based on each players' points per 90 minutes (PP90). Keep in mind that the players with a low minutes played percentage (MP%) could be less likely to see the field, based on the number of minutes they've logged versus the number of minutes that their team has played. I've also included a couple of budget options for each position, just in case you're strapped for cash.

Aside from Clint Dempsey, who does not have a double-game week anytime soon but is always a threat to score big points, is there anyone that should be included that may have missed the cut?

Best of luck, and be sure to pick a different captain than me!