Find out which players other Fantasy MLS managers are targeting for the upcoming game week.

Share All sharing options for: Fantasy MLS: Embracing the Hot Commodities for Week 23

There's only one round left before the next double-game week for San Jose, LA, and Seattle, and it looks like savvy Fantasy MLS managers are already preparing their rosters to take advantage of the potential increase in points (via fantasy.MLSSoccer.com): 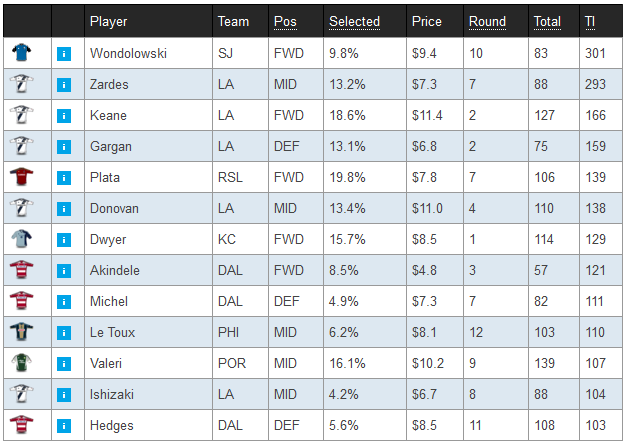 As of Monday morning, five of the top six transfer targets (Transfers In - Round) are on the San Jose Earthquakes or the LA Galaxy. Chris Wondolowski has averaged more than seven points per game since he returned from the World Cup, and his 10-point performance against LA turned more than a few heads. LA has only lost one match out of their last 12, so it's no surprise that several Galaxy players are up there; many Fantasy MLS players believe that Landon Donovan, who recently announced his plans for retirement, will go out with a bang. Sporting Kansas City also has a favorable upcoming schedule with three home games in a row followed by a double-game week and a match at Chivas USA.

Is there someone not in the top "transfers in" list that you're planning on adding?

Good luck this week, and as always, be sure to pick a better captain than me!