Fantasy MLS: Going with the Pack?

The Round 24 transfer window is tonight at 8:00 PM. If you have not figured out who you're going to drop or bring in, then going with the pack may not be a bad call.

Share All sharing options for: Fantasy MLS: Going with the Pack?

Fantasy MLS managers have been active during this short, five day transfer window, logging nearly 3,500 transfers for the top three traded players alone. Chad Marshall and Gyasi Zardes are the hottest targets for this week, as the Seattle Sounders, LA Galaxy, and San Jose Earthquakes all have two games this week. The biggest non-DGW draws were Tesho Akindele and Fabian Castillo, who ripped apart San Jose's defense last weekend. Drew Moor and Javier Morales were both dumped by several hundred Fantasy players due to injuries in last week's fixtures.

If you haven't made your moves yet, there are definitely worse options than the guys on the left (stats from MLSSoccer.com): 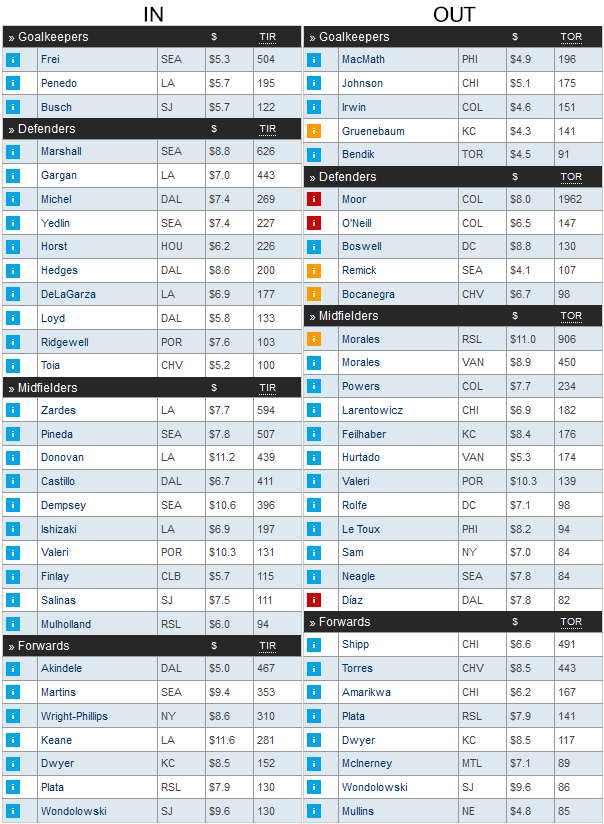 Don't forget: next week is an extra double-game week for LA, and DC United also play twice in Round 25.

Who are you planning on giving the armband to this week? Don't forget to set your lineup tonight, and as always, don't forget to pick a different captain than me!