This season didn't go how the Houston Dash had hoped, but there is hope for the future.

I was in Virginia last week and went to the season opener between the third-ranked University of Virginia and Marshall women's soccer teams. My mom and I were two of 1,757 fans at Klocker Stadium to watch UVA win 3-0 over their unranked opponent. Marshall's game plan was simple; simple enough my mom even pointed it out: they dropped all of their players into the back in an attempt to prevent UVA from scoring. When they did get a hold of the ball they would pass it up the field to...well...no one. Their plan didn't work, however, sophomore Alexis Schaffer and juniors Makenzy Doniak and Kaili Torres all scored a goal while Morgan Brian notched two assists in the game. Brian had several chances at goal herself including a penalty kick after being tripped in the box. Brian took the kick but sent it right to the keeper.

Why is this pertinent to Houston you may ask? Morgan Brian. The #6 midfielder for the Virginia Cavaliers is considered to be the number one pick in the 2015 NWSL college draft. The Houston Dash finished the NWSL season at the bottom of the standings which gives them the number one draft pick in 2015. Brian won the MAC Hermann trophy last season and is on the pre-season watch list to win the award again this season. She has played on the US Women's National Team since the spring of 2013. When the ball is at her feet she is creating chances something the Dash desperately need. Half way through the game my mom turned to me and asked, "She can pretty much make the ball do whatever she wants can't she?" Yes, yes she can. Passing the ball to a player who is seemingly double covered? No problem. While penalty kicks may not be her thing watch her left foot it's pretty stellar. 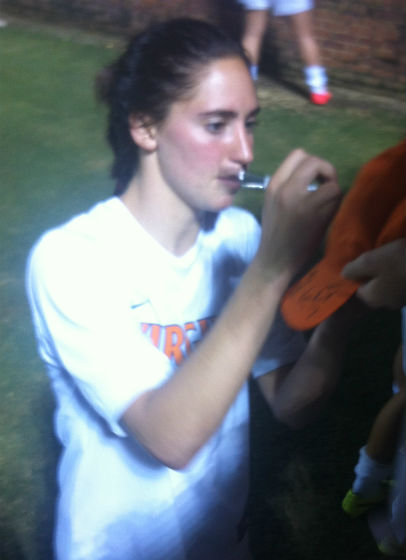 Brian was among the UVA players who signed autographs after the win.

While I went to the game with Moe Brian on my mind what I found was a team bursting with talent. Top Drawer Soccer has four UVA players listed in top 25 of their preseason top 100 players. Danielle Colaprico and Makenzy Doniak were also on the pre-season MAC Hermann trophy watch list. Doniak played only 39 minutes in the game I watched but her presence on the field was immediately felt. UVA had controlled possession through out the match, but had some trouble with wayward shots. When Doniak came in they had better presence in front of the net. A dynamo her entire time on the field was Brittany Ratclidffe, a junior. She was constantly on the ball tracking it all over the field. She had several shots on goal and dropped back to defend during the brief times Marshall was able to gain possession of the ball. As UVA controlled possession, the defense had little to do, but I couldn't help but be impressed with Megan Reid every time the ball was at her feet. I was surprised to find that she is only a freshman as her maturity with the ball looked like that of a junior or senior. She was calm with the ball at her feet and easily fed the ball up field to the midfield. It left me wanting to see her against a tough ACC team, which they'll see a lot of this season.

With top players all over the field UVA will be a team to watch this season. With the player expected to be number one in the draft Dash fans should be keeping an eye on Morgan Brian. One thing is for sure the girl looks good in orange.