Last week's double-game week provided plenty of mega-scoring opportunities, but at a high price. Could you afford it?

As most of you are probably aware by now, Landon Donovan, Robbie Keane, and Obafemi Martins tore up the Round 24 double-game week, scoring 25, 21, and 21 points in one week, respectively. However, the top five scorers for the round were anything but cheap: Martins was the "bargain" player at $9.4m (stats from fantasy.mlssoccer.com):

Which led me to the question, "How much would it cost to own ALL of the highest scorers in Fantasy MLS at once?" The answer? A cool $159.4 million, according to these numbers: 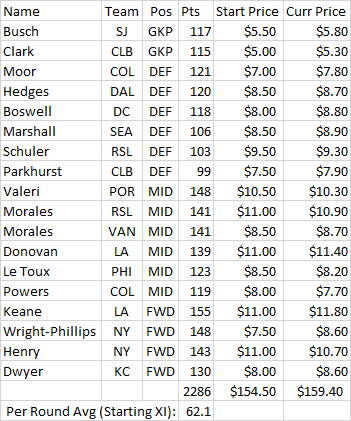 Obviously, very few (if any) fantasy managers have managed to accrue that much cash over the 24 weeks. I'm not even sure it's mathematically possible at this point. That said, it does emphasize the importance of building the FMLS bankroll early on in the season. Some managers, if they were able to grab players early on, could trot out this lineup right now, subbing out some non-starters for quite capable subs: 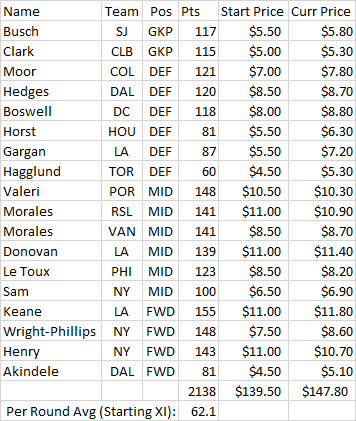 All this goes to show that the more money a fantasy manager has, the more options there are at his or her disposal. Down the stretch, less focus is required on managing salary, but the managers that have a few extra million right now might be able to make one or two moves that others can't afford.

How's your salary doing? Any questions leading up to this round's DGW? Let me know, and as always, be sure to pick a different captain than me!