Fantasy MLS: Clean Sheets are Meant to be Bruined

Only nine of the 26 possible clean sheets were converted in Round 21. More players are focusing on the attackers in Fantasy MLS, but should they?

Share All sharing options for: Fantasy MLS: Clean Sheets are Meant to be Bruined

At the beginning of the season, I sent out a warning about overvaluing forwards. It sounded good at the time, but this MLS season has been anything but predictable. Now that 21 Fantasy MLS rounds are in the books, we're going to take a closer look at the numbers by position to determine the most effective place to allocate our fantasy dollars. 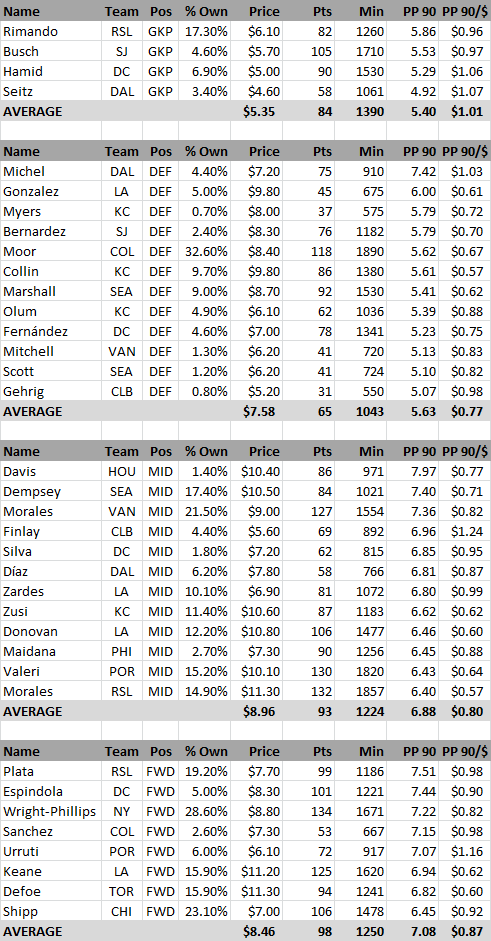 These players are enough to fill two complete FMLS rosters. Unfortunately, filling out a roster with the top players from each of these tables would require a budget of almost $146 million. However, with a couple substitutions, a pretty solid lineup is within managers' grasps.

Goalkeepers are easily the most cost-effective way to get points in Fantasy MLS. Basically, for each million you spend you'll be rewarded with one point per match. Unfortunately, goalkeepers are also the lowest-yielding in terms of output. Nick Rimando and Jon Busch have put in solid seasons for their clubs, but there's not a lot of drop-off for spending less. Clint Irwin (COL, $4.9), for example, is bringing in 4.83 points per 90 minutes.

This season, the price of defenders has gone up substantially, bringing their Fantasy MLS costs nearly on level terms with midfielders and forwards. Unfortunately, the number of points generated by defenders this season is 1.25 - 1.45 less per 90 minutes than their attacking counterparts. My back line features a couple of solid players, such as Chad Marshall (pre-injury) and Drew Moor. These guys are complemented by bargain defenders, such as Dan Gargan (LA, $6.6), Nick Hagglund ($5.2), and Steve Birnbaum ($4.7), available to provide coverage without restricting my overall salary much.

The real points have been up top. Based on the figures above, it's easy to see why a majority of managers are reverting to 3-5-2 and 3-4-3 formations, to bring in as many attackers are possible. Seven midfielders and nine forwards have already hit 100 fantasy points for the season, compared to two each for goalkeepers and defenders.

What formation has been working for you? Let me know, and as always, be sure to pick a different captain than me!