Stat Dive: The Art of the Pass

A statistical look at how the Dynamo were able to cap a dominating performance with a win.

Share All sharing options for: Stat Dive: The Art of the Pass

The scoreline didn't exactly reflect it but the boxscore absolutely did.

Sunday night saw the Dynamo find a win that has eluded them since May 21st -- the last time they took on DC United. During that period, the team dealt with World Cup absences, season-ending (and disrupting) injuries, and shrinking bench depth. With most of those players back (and a couple newbies), the Dynamo looked perhaps their most dangerous all year.

Outshooting DC United 20-7 (6-2 for on-target shots), Ben Olsen's squad hardly looked like a team that dismantled a starry Toronto in a midweek game. The Dynamo, on the other hand, welcomed a much needed return to form. What could account for this reversal of fortune? Using the Opta MLS Chalkboard, we can delve into several illuminating tools that can provide answers. One aspect that can tease out what happened Sunday night is the location of successful passes. Here, we can see where each player spent a good amount of their time and where they found open spaces to move the ball around.

When our preview was published last weekend, there were a few questions lingering in the lineup -- would DaMarcus Beasley and Luis Garrido see the field? Would Dom threaten Ricardo Clark or Corey Ashe's starting roles? Perhaps surprising some, both nabbed the start with DMB leaping Ashe and Garrido filling in for the shipped-off Warren Creavalle. With a full-strength squad, the Dynamo impressed and, as you can see below, they smothered the field with possession, giving DC United a tough time of it all night. 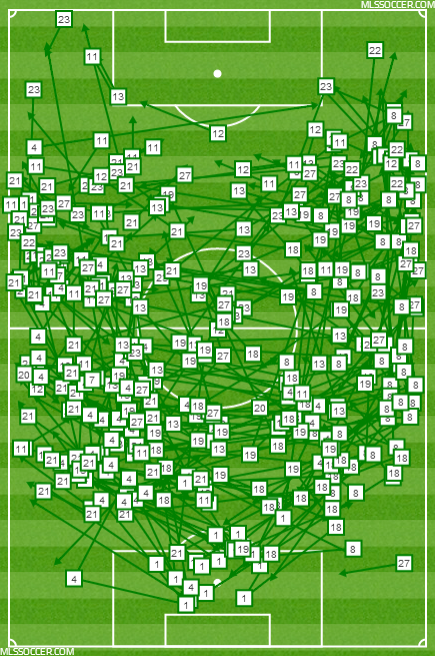 The tried-and-true method of Dynamo attack has always resided on the flanks and this game was the perfect example of how every player, from defenders to forwards, shifted around to provide the best possible attack. 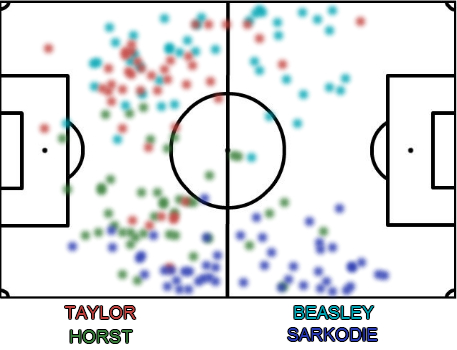 First, let's look at the shape of our wings. Beasley and Sarkodie are able to play a high-attacking line thanks to the perfect defensive cover supplied by Taylor and Horst. This leaves the center of defense vulnerable, but Garrido proves the ideal signing as he is able to drop back and help defend the top of the box on counters, giving time to defenders running back to their positions. 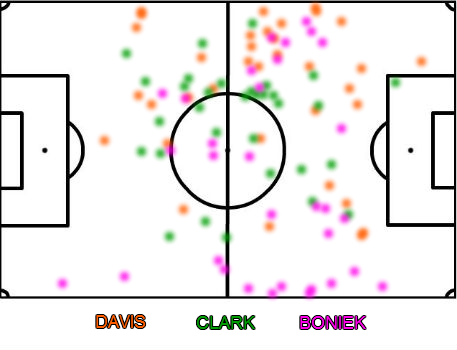 All of the deep play from our defenders frees up our attack to move around the top of the box and stretch the DCU defense. The ability of Davis, Clark, and Boniek to pass, hold the ball, and give Barnes and Bruin space to make runs really emphasizes how critical they were when the Dynamo were slumping in their absences. Even more, Davis and Boniek have practically mirrored movement. That versatility not only gives defenses fits, but really highlights excellent team play to cover each other. 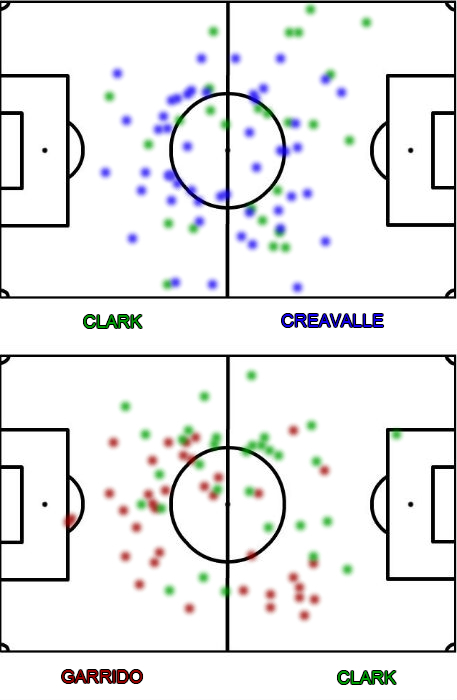 Finally, our central midfield is much more organized than in the past. On Sunday, Garrido does a great job of staying off Clark's left side and letting him have time on the ball. At the same time, Clark doesn't get too deep on the right side of play and Garrido can claim that zone. Compare this to Clark and Creavalle during the Dynamo's July 17th match versus Toronto FC (Creavalle's last in a Dynamo uniform) where the two positions overlap entirely, begging for miscommunication and zonal errors (that game ended 2-2).

How They Did It

In our preview, we thought we knew where DC's strengths lay. Left Midfielder Chris Rolfe has been actively dangerous and able to spring Eddie Johnson and Luis Silva easily the last few weeks. On Sunday night, this was not the case.

Rolfe and DC's left-back Taylor Kemp were shut down by newcomer Beasley and crazy in-form Brad Davis. As a result, Rolfe barely saw the ball and DC were forced to use Sean Franklin and Lewis Neal, flowing the attack on the right side. Even then, Kofi and Boniek were quick to meet them and Neal failed to advance the ball much further than Franklin's runs. Instead, DC possession ended up stuck and a toe-poke away from switching to Houston.

That central midfield issue highlighted above with Clark and Creavalle? DC's Davy Arnaud and Perry Kitchen ran into the same issue and ended up overlapping their positions all night. Without focus in the center of the pitch, the failing flanks for DC have nowhere to go and turnovers become inevitable. Ricardo Clark, without much pressure from the DC central defense, is able to help push the ball forward, breaking Bruin and Barnes into the box.

No midfield organization also means that the much-maligned Eddie Johnson and Luis Silva push further into midfield to help free the ball. The two end up captive to the midfield and unable to push forward into the box. This situation is the same that Will Bruin and Giles Barnes found themselves played into earlier in the year with missing personnel. Without the ball movement of Davis, Clark, and Boniek, the striker pair are stranded and forced to meet the ball in the middle rather than receive it.

Ultimately, the stats tell a story of a flustered DC side, unable to cope with the reinvigorated, hard-nosed Dynamo. Chris Rolfe was rendered irrelevant and the Dynamo were able to have their way with possession. Thanks to impressive team organization, the Dynamo players were able to spread out and enjoy total field control for one of the first (and hopefully not the last) times this year.