Dash midfielder and Canadian National Team Member Kaylyn Kyle has caused quite the uproar with her recent signing of a 3-year, $15,000 endorsement with Field Turf.

With the growing outcry against turf being used in the 2015 Women’s World Cup, Dash midfielder and Canadian National Team Member Kaylyn Kyle has caused quite the uproar with her recent signing of a 3-year, $15,000 endorsement with FieldTurf. While Kyle will be in commercials for the company, a group of 40+ soccer players across the globe will continue their pursuit of a lawsuit against the Canada Soccer Association and FIFA on the grounds of gender discrimination. (The CSA has stated their proposal to host the 2015 Women’s World Cup indicated they would be playing on turf. FieldTurf will be used in four of the six stadiums during next year’s Cup.)

Kyle’s own agent, Brian Feldman, has been quoted as saying, "if an NFL player can do it, why can’t a female soccer player do it?" Perhaps someone should point out to him that NFL studies have indicated ACL injuries are 88% higher when played on turf, and female athletes are at higher risk for such injuries.

FieldTurf was quick to point out the endorsement was not about the money for Kyle, and that she supports playing on turf. In the NWSL, Portland, Seattle and Western New York play or have played on fields with FieldTurf. Boston, from whom the Dash acquired Kyle from earlier this year also plays on FieldTurf.

Interestingly enough, Kyle had words of her own about turf on Twitter last June. So far, she has been silent on the deal. 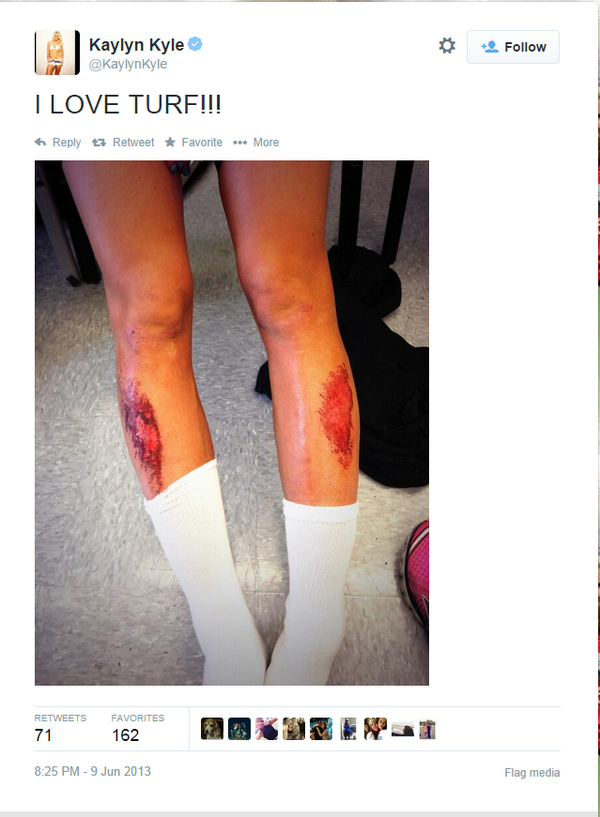