Vanishing Points: How the Dynamo can still make the playoffs

With a handful of games remaining, we take a look at what exactly the Dynamo have to do (and hope for) in order to make the playoffs.

Share All sharing options for: Vanishing Points: How the Dynamo can still make the playoffs

These are the things we begin hearing right around this time every year as the Dynamo edge toward our inevitable slot in the Wild Card round. This year feels different. This year feels like one long nightmarish slog that we just can't wake up from.

We've dealt with three ACL injuries, three concussions, national team camps, and a lineup that's been shuffled again and again. Still, we have a few bright spots that are a source of pride. Despite some fans' short-term memories, Bruin is just two goals shy of matching his season-high 12 goals from 2012. Luis Garrido's presence in midfield has been nothing short of revelatory and sparks wonderment at why Houston wasn't able to snag him earlier. Brad Davis has somehow reversed aging and has already matched his 2013 production (4G, 9A) in 7 less games. This is despite going to Brazil for his first World Cup after 12 MLS seasons.

But this is no eulogy. There still exists a path for the Dynamo into the playoffs but all of the adversity I listed earlier pales in comparison to what they have to do moving forward. As of this week, the outlook is understandably grim: 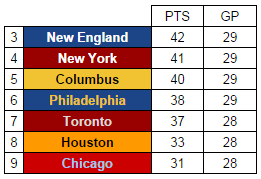 Armed with a game-in-hand, the Dynamo can still make a ruckus right now and in the month of October to reach the coveted 5-spot. New England and New York would become practically unreachable with two more wins (a likely outcome that would raise them to 48 and 47 points, respectively), demanding that the Dynamo win five of their last six.

This pits four teams (Columbus, Philadelphia, Toronto and Houston) to duke it out for the last chance at the playoffs. It's no secret that the Dynamo are absolutely the "Dark Horse" to win here but what exactly could happen to make Houston a contender? To figure that out, we'll need to take a look at the remaining schedule for a few teams and arrive at a "magic number" we'll need to aim for if we hope to have a post-season.

On the button right now is Columbus Crew. With five matches remaining, the Crew face three on the road. Considering their poor road form (3-5-6), it will be difficult to find results while traveling to the intimidating stadia of New England, Philadelphia, and New York. The Crew will be hoping for results at home against Montreal this weekend and an end-of-season match sure to be full of drama against Philadelphia. Should they win their home matches (and fail to get a road result), the Crew could finish the year with 46 points. If the Crew muster a win on the road along with their home matches, the Dynamo will be effectively eliminated unless they go a perfect 6 of 6 record to contend for fifth.

One point behind the Crew, Philadelphia have a favorable schedule remaining. Three of their last five will be at PPL Park where they've built an impressive home record, losing just two matches all year (both in May). These matches aren't assured, however. Aside from hosting Sporting Kansas City, Philly also have a home-and-home series against Columbus to play. These two matches will be of critical importance to the Dynamo where two draws could provide the best possible chance for Houston to overtake. Philly winning out just their home games would tally 47 points and could very well be our "magic number".

Reaching the 47-point total allows us to figure out what the minimum is needed to get there. There are only four possible records we can post in order to reach 47 or higher. The minimum is a 4-0-2 record which is possible by winning all three home games, one on the road and fighting for at least a draw in our other two road matches (we have games in New York, Toronto, and a Chicago finale). That puts us at a very favorable 84% chance to make the playoffs and, I think, is the most likely route that we can achieve. The other three outcomes to reach the playoffs involve going undefeated (51 Points), or posting 5 wins and either a draw (49 Points) or a loss (48 Points). Considering our road form this year, Dynamo fans certainly understand that to be a tall order.

Unless I have somehow predicted the rest of the year, this is likely to change. There are many "six-point games" between Eastern teams that will take place and those games carry especially heavy weight on these playoff chases.

Following this weekend's 0-0 draw in Philadelphia, I heard a lot of people calling out for falling sky. That draw, however, was exactly what was needed to keep pace. Up until now, the Dynamo have accomplished the absolute minimum to keep themselves relevant in the playoff discussion. From here on out though, they will have do more than scraping by and post what would be, considering injuries and lineups, the most impressive late-season comeback in Dynamo history.

What do you think? Is this Dynamo team up to the task? Have other ideas for a "magic number"? Share your thoughts with us below!

Should the Dynamo find their their way into the playoffs for a fourth consecutive year, this is what the schedule will look like: