There's only one team with two games this week, but the Seattle Sounders have their work cut out for them.

Share All sharing options for: Fantasy MLS: Sleepless in Seattle

If there's anything I learned this weekend, it's that Bradley Wright-Phillips is a cyborg in a human body. Only a few days after coming out of a match at halftime for a leg injury, BWP scores a hat-trick. What human does that? He had the best week of the bunch, but fellow attackers Luis Silva, Quincy Amarikwa, Robbie Keane, Diego Valeri, Fanendo Adi, and Gilberto all posted double-digits in Round 28. Only two defensive players managed to score at least 10 points: Steve Clark and Nick Hagglund. Here are the top scorers for Round 28 (via MLSSoccer.com): 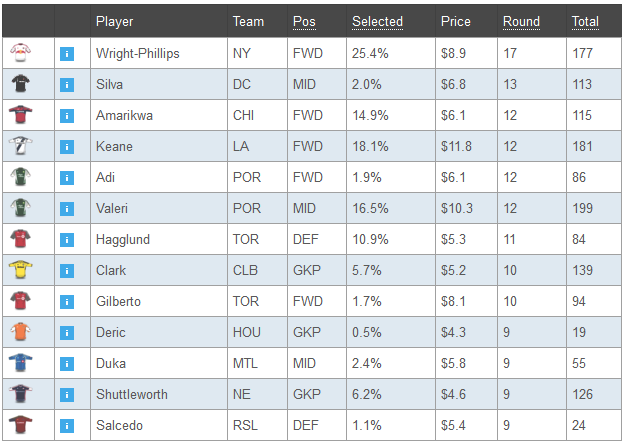 This week, most Fantasy MLS managers will be turning their attention to the Seattle Sounders, as they are the only team with two games this round. Seattle's en route to a tough matchup at FC Dallas, followed by what should be an easier time at Century Link against Chivas USA. The good news for managers worried about squad rotation is that Clint Dempsey and Obafemi Martins were both used sparingly last week in their 4-1 loss at Red Bull Arena, and Obafemi only played 60 minutes in the US Open Cup win against the Philadelphia Union. The bad news is that Seattle did play two matches last week, and Sigi Schmid has no reservations about tinkering with the starting XI.

Seattle players worth bringing in:

Clint Dempsey: 37 points in his last five matches, including a 31-minute cameo in New York
Obafemi Martins: Two multi-goal games in the last few weeks; both Oba and Clint scored in a.e.t. in the US Open Cup final
Chad Marshall: Good for at least two defending points and two playing time points per match -- add one clean sheet to that, and you're looking at 10+
Lamar Neagle: Goal or assist in last three matches

I will likely wait until the lineups have been posted to make my transfers for the week, but keep in mind that the rosters lock TODAY at 8:00PM Central time.

Best of luck, and as always, be sure to pick a different captain than me!