Dynamo take initial lead, but had to come from behind after conceding two goals to Montreal to win 3-2

It was hard to know what to expect before the game tonight because of several missing Dynamo players listed as out due to injury. Will Bruin and Jermaine Taylor were initially listed as questionable, but eventually ruled out due to injuries sustained in the drubbing of Sporting Kansas City last week. Tally Hall is done for the year with a knee injury. Kofi Sarkoide sat tonight's match due to yellow card accumulation. What were we going to do? Fortunately, DaMarcus Beasley returned after missing two games due to a hamstring injury, and Corey Ashe would be moved to Kofi's spot on the right side.

With all of the substitutes filling in for the men in orange, the formation looked a little wonky, especially on the defensive side. The Dynamo were pushing Beasley higher on the left into effectively a midfield position and having Garrido drop deeper to help the back line.

The Dynamo opened the scoring in the 31st with Giles Barnes corralling a deflected pass from a potentially offside position. 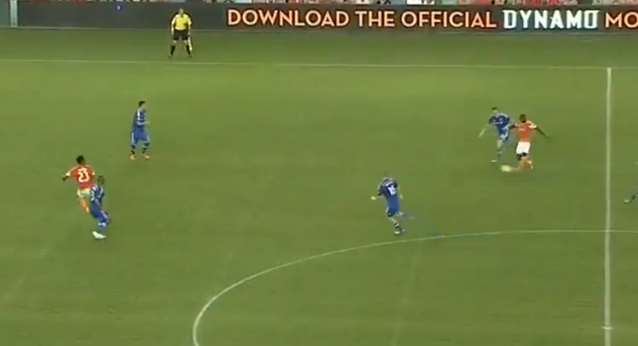 Giles turned the gifted opportunity into a silky smooth finish past the keeper for an early Dynamo lead. I have chastised Barnes for taking too many shots with too few being on-target, and it was nice to see him for the third game in a row focus on getting more 'high-percentage' shots in the box. With Bruin out for an undetermined amount of time, I hope to see more of this from Barnes.

The Dynamo continued to threaten through the rest of the first half until David Horst decided to leave Dilly Duka unmarked just inside the box.

While Deric had excellent positioning, it wasn't enough to keep the ball out of the net, as Duka placed it perfectly just inside the left post.

The Dynamo team, full of several non-1st team choice starters, was looking very coherent on the backs of highly performing regulars Brad Davis and Giles Barnes. While Davis was positioned on the left side typically, he was his normal whirlwind of action carrying across the field in diagonals and pulling defenders out of position. You have to wonder where we will be after he retires.

Montreal came out in the second half looking even flatter than the first half, but managed to string together two passes that caught the Dynamo back line sleeping in the 54th minute that lead to their second goal.

The sinking feeling had returned. I still felt like we could win the game, but losing or even tying to Montreal at home was poison to the Dynamo's chances at making the playoffs and I was looking at a 2-1 Montreal scoreline at BBVA Compass Stadium. I felt significant queasiness and it wasn't from the delicious tacos I had at lunch from Tacos Tierra Caliente.

In the 61st minute, the Dynamo would pull the game back level with another Giles Barnes goal, except this one came from a great cross from Cummings and a terrible misstep by the Montreal defense.

A tie wouldn't be good enough for the Dynamo, and Ricardo Clark would answer our orange-tinted prayers just four minutes later in the 65th minute with a goal off of a Brad Davis set piece.

That may sound familiar because all four of Ricardo Clark's goals in 2014 have come off of a Brad Davis set piece. I think four data points is providing enough of a reason for Brad Davis to keep kicking the ball at Ricardo Clark.

Montreal brought in Jack McInerney in the 73rd minute and while he threatened a few times, he was never able to control the ball enough to put together a shot on target. The Dynamo would dominate possession through the end of the half, and although the game had been blown open with three goals in an eleven minute span, the Dynamo were able to shut down Montreal for the remainder of the game.

So where do the Dynamo go from here? We have another home game next Saturday, September 13, against the Columbus Crew. While it's not mathematically impossible to make the playoffs with a loss to the Crew, the Dynamo need to consider all remaining home games as must win affairs. After the complete destruction in Columbus recently, hopefully the Dynamo can continue their improbable, but expected, push towards the playoffs for the eighth season in nine.